“Cyberangels of Peace” is a digital age artwork by American-Israeli artist Mel Alexenberg in which Rembrandt-inspired cyberangels are launched on a virtual flight from the Israel Museum in Jerusalem to the Mohammed VI Museum for Modern and Contemporary Art in Rabat. 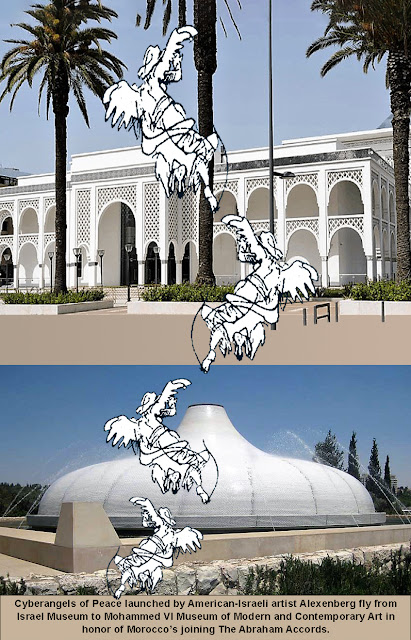 King Mohammed VI of Morocco on 16 June 2021 sent a congratulatory letter to Prime Minister Naftali Bennett upon his taking office. In the letter, the King of Morocco wrote:

"I am pleased to send you warm congratulations and my wishes for success on the occasion of your being elected as Prime Minister of Israel. I would like to take this opportunity to emphasize to you that the Kingdom of Morocco is determined to continue its active role and its best efforts to advance a just and lasting peace in the Middle East, which will enable all peoples of the region to live side by side in security, stability and friendship."

"I thank His Majesty, King Mohammed VI of Morocco, for his warm greetings and I would like to express my highest esteem for him. Israel views Morocco as an important friend and partner in the efforts to advance peace and security in the region. I will further Israeli-Moroccan relations in all spheres for the welfare and prosperity of both peoples, who have been friends for many years."

The Abraham Accords were signed in Washington D.C. on 15 September 2020 between Israel and the United Arab Emirates and Bahrain. Shortly after, Morocco and Sudan joined the accords.

The Bible tells that that Abraham’s sons Ishmael and Isaac came together to bury their father. Now, four thousand years later, their heirs came together in brotherhood on the White House lawn. These accords celebrate the digital age reunion of Arabs and Jews, cousins who were once brothers.

This historic event bringing peace to the Middle East corresponded with the global tribute to Rembrandt on the 350th year of his passing. I launched Rembrandt-inspired cyberangels from the Shrine of the Book at the Israel Museum in Jerusalem where the oldest scrolls of the Bible are housed to museums in UAE and Bahrain. Since Morocco has joined the accords, these cyberangel virtual flights link Morocco and Israel in peace through art.

Cyberangel flights that herald peace between Israel and all the Abraham Accords countries are documented in my Global Tribute to Rembrandt blog.  They are shown flying from the Land of Israel via smartphone and social media on the cover of my book Through a Bible Lens. The book explores the biblical roots of the Abraham Accords in the language of digital culture. 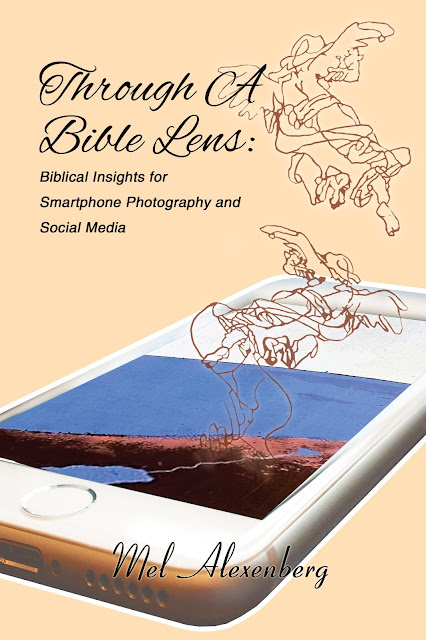 Jews have a long history of living in Morocco. After the establishment of the State of Israel, most of Morocco’s Jewish population moved to Israel where they contribute to all walks of life. Today, about a million Israelis have family origins in Morocco.

In 1977, my wife Miriam and I moved from New York where I was professor at Columbia University to Yeroham, a town isolated in the Negev desert, where I founded a college. Most of its population had moved there from Morocco. When our new neighbors learned that we were Americans, they said to us in Hebrew, “Americayim Moroccayim, almost the same thing.”

Our family became one of the families with origins in Morocco. Our New York born daughter Iyrit is married to Dr. Yehiel Lasry who was born in Morocco. His family moved to Ashdod when he was six years old when it was a small town on the sea. He is now the mayor of Ashdod that has grown under his creative leadership into one of Israel’s largest cities and its major port. He studied medicine at Ben-Gurion University, was Surgeon-General of Israel’s navy, specialist in internal medicine at Kaplan Hospital in Rehovot, member of Knesset (Israel’s parliament), and a founder of the Andalusian Orchestra that creates a cultural bridge between Israel and Arab countries. Four of our grandchildren are half Moroccan.

Documentation of my Cyberangels of Peace digital age artworks  are in the collections of more than thirty museums throughout the world, from Israel Museum in Jerusalem, Metropolitan Museum of Art and Museum of Modern Art in New York, Victoria and Albert Museum in London, to Art Museum of The Hague in The Netherlands. I began creating these artworks when I was head of the art department at Pratt Institute and research fellow at MIT Center for Advanced Visual Studies.

At that time that I working simultaneously in New York and Cambridge, I was invited to create an artwork at the Israel Museum affiliated printmaking workshop in Jerusalem. The serigraph that I created there is the basis of my current series of virtual cyberangel flights. It is in the collection of the Israel Museum. It illustrates the biblical passage of angels going up the ladder in Jacob’s dream from the Land of Israel and coming down throughout the world bringing a message of peace. 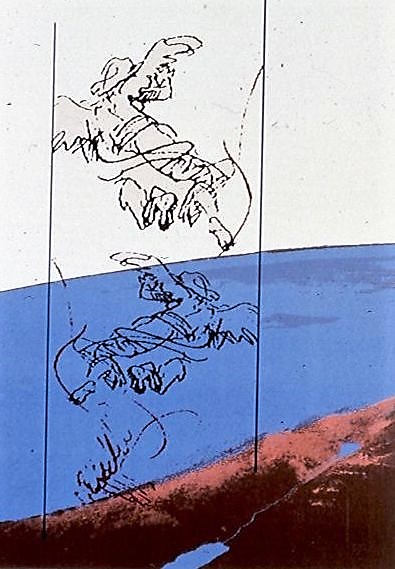 My wife and I live in Ra’anana, the same city north of Tel Aviv where Israel’s Prime Minister Naftali Bennett lives with his wife and children. Before partaking of the Sabbath eve meal, our Jewish families sing, “May your coming be for peace, Angels of Peace, angels of the Exalted One.” The song begins with the words shalom aleikhem (may peace be with you). Shalom aleikhem is the traditional Hebrew greeting when people meet. It is akin to the Arabic greeting salam aleikum. May the Hebrew Malakh Shalom and the Arabic Malak Salam be recognized as one and the same Angel of Peace.

From Rembrandt Inspired Cyberart in MoMA Collection to NFT Cryptoart

To Sarah Suzuki, Associate Director of The  Museum of Modern Art MoMA as the world’s foremost museum of modern art should   be the first m... 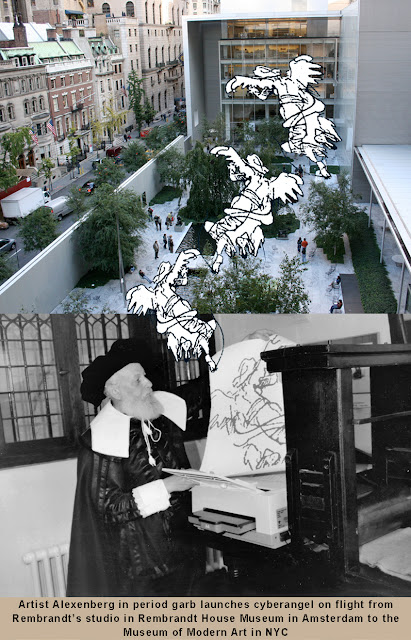 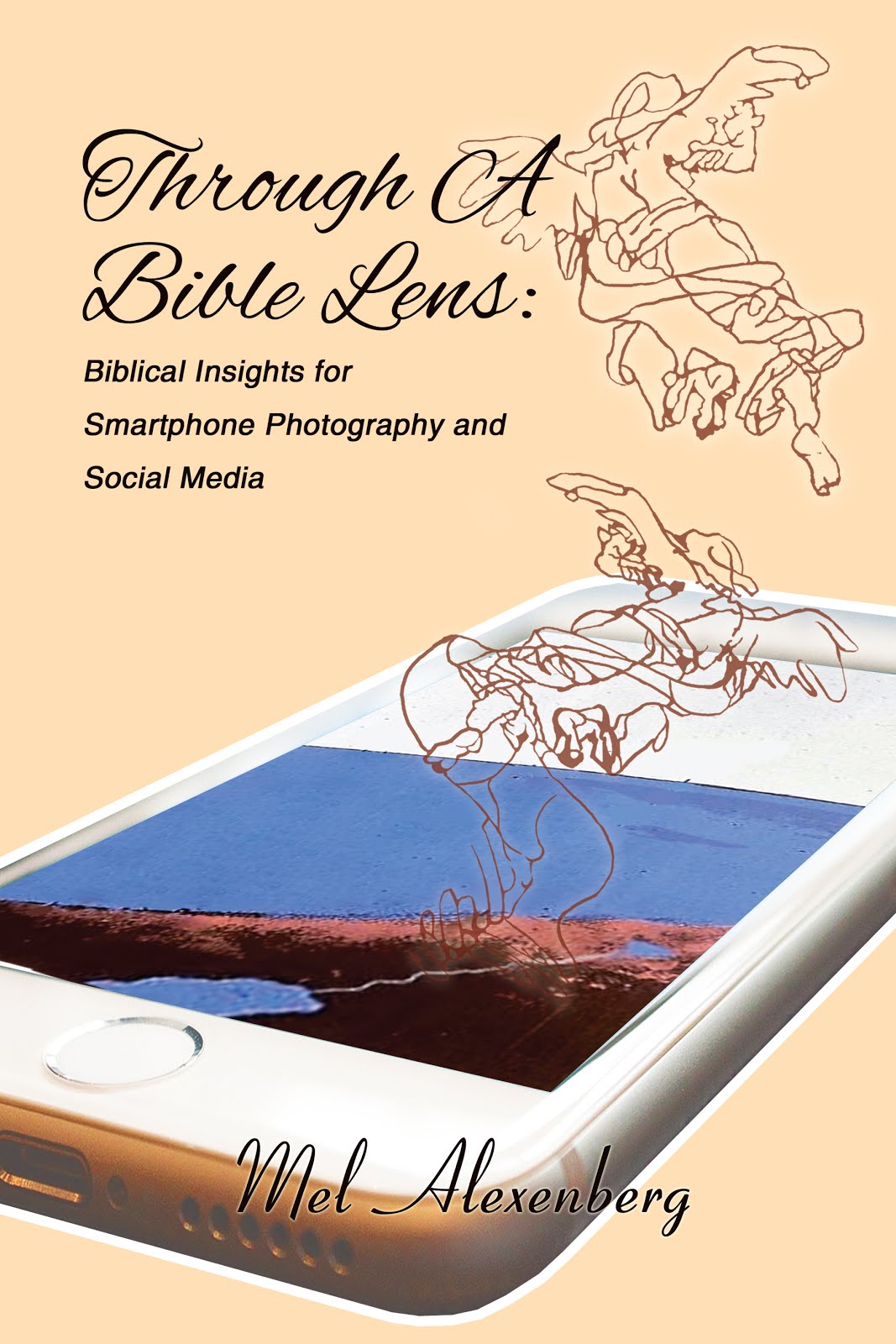 Mel Alexenberg
I am an artist, educator, writer, and blogger exploring the interface between digital culture, creative process, and biblical consciousness. As an educator in USA, I was professor at Columbia University, research fellow at MIT, head of the art department at Pratt Institute, and dean at New World School of the Arts. In Israel, I taught at Bar-Ilan, Ariel and Tel Aviv universities and at Emunah College and Bezalel Academy of Arts and Design. As a writer, my books are: 'Through a Bible Lens: Biblical Insights for Smartphone Photography and Social Media,' 'Photograph God: Creating a Spiritual Blog of Your Life,' 'The Future of Art in a Postdigital Age: From Hellenistic to Hebraic Consciousness,' 'Educating Artists for the Future: Learning at the Intersections of Art, Science, Technology, and Culture' and 'Dialogic Art in a Digital World: Judaism and Contemporary Art' (in Hebrew). As an artist, my conceptual, environmental, and digital artworks have been seen by millions and are represented in the collections of more than forty museums worldwide. I live in Ra'anana, Israel, with my wife artist Miriam Benjamin. website: www.melalexenberg.com